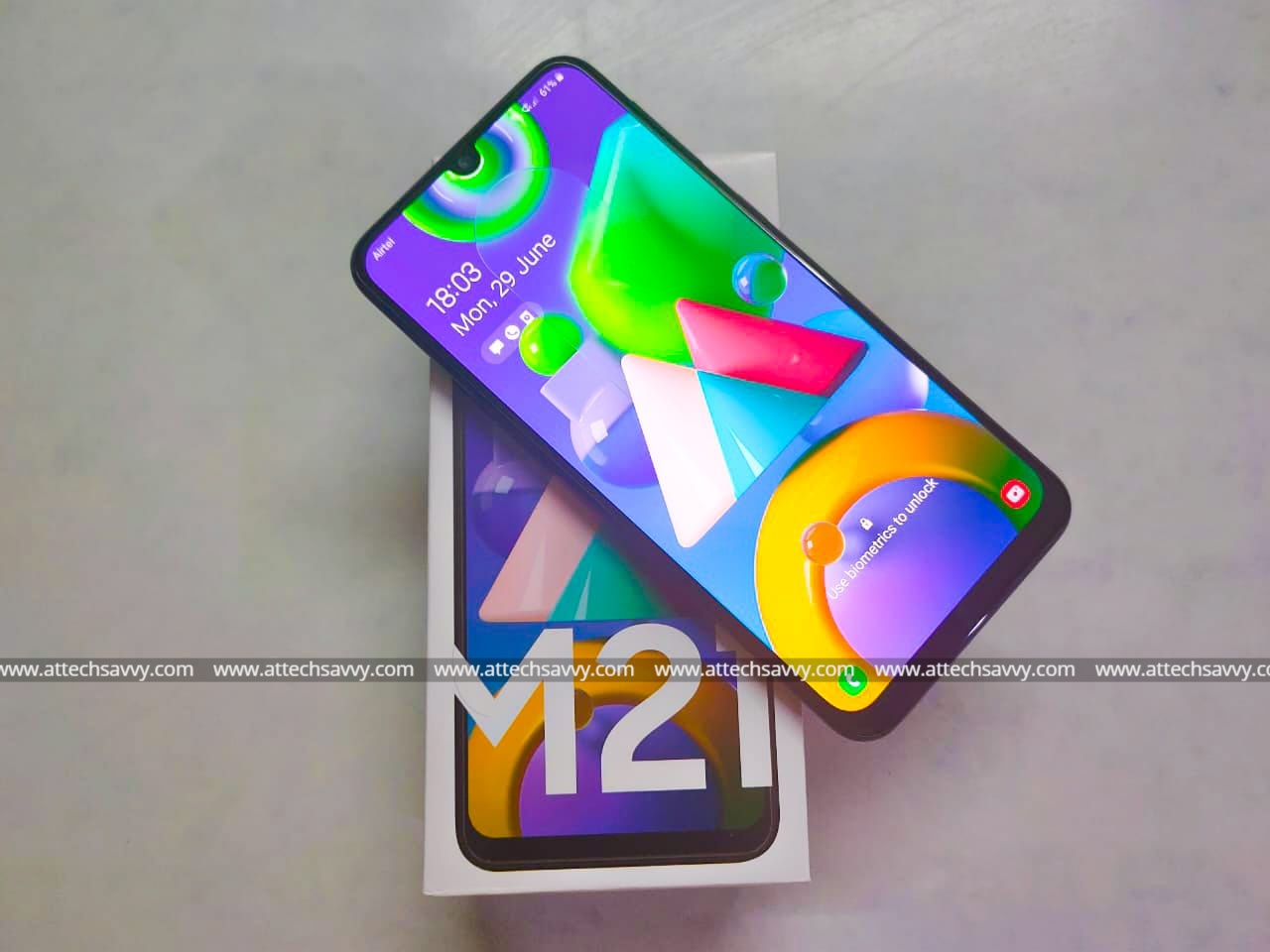 Samsung launched the Galaxy M21 in India earlier this year, skipping the Galaxy M20s that was to be the successor to the Galaxy M20. The smartphone is currently available at Rs. 14,499 on Samsung website while on Amazon.in, it is available at Rs. 13,999. The Korean giant, Samsung introduced the M-series of smartphones to compete with brands like Xiaomi, Realme, Oppo and others. And if you are looking for a non-Chinese smartphone under Rs.15,000 then you must continue reading the latest gadget review by Techsavvy.

Let’s take a look at the detailed review to see if the Galaxy M21 stands out in the crowd or not and for whom it will be suitable.

The Galaxy M21 comes in a typical M-series design i.e. with a rectangular module that houses a triple camera setup and LED flash. Moreover, the handset is available in 2 colour variants including Black and Blue. It comes in a simple design without any gradient or special texture which makes it look classy. Since it bears a polycarbonate body with a shiny finish, it will attract fingerprint. We would recommend that if you buy this smartphone also order a back cover along with it because Samsung doesn’t provide it in the box.

Further, the handset measures 159 x 75.1 x 89 and weighs around 188g. However, it bears a 6000mAh battery and you may think it will be large or bulky. Yet unexpectedly, we found it lightweight and comfortable to carry. It seems Samsung has done a commendable job in weight distribution. All the physical buttons are at the right side of the device which makes it a handy smartphone and convenient to use in one hand. The rear-mounted fingerprint scanner is placed at the correct position but has no depth which sometimes makes it difficult to locate. However, if you use a back cover, you’ll get the depth and your index finger will fall on that point by default. The volume buttons are placed at a higher position above the power button which may be uncomfortable at the starting but you’ll eventually get habituated to it.

Looking at the display, there are very fewer bezels on the sides but a thick chin is present at the bottom. We get a U-style notch at the top that holds selfie camera and Samsung calls it Infinity-U display.

We get Samsung’s famous AMOLED FHD+ display of 6.4-inches with 1080 x 2340 pixels and Corning Gorilla Glass 3 protection. Indeed the display shows bright and accurate colours as well as good viewing angles from the corners also. We also get Widevine L1 certification so this smartphone would be ideal for you if you watch a lot of HD content on OTT platforms. With 420 nits of peak brightness, we can also see the display clearly in sunlight. Last but not the least, we get everyone’s favourite Always-on-display feature in this. 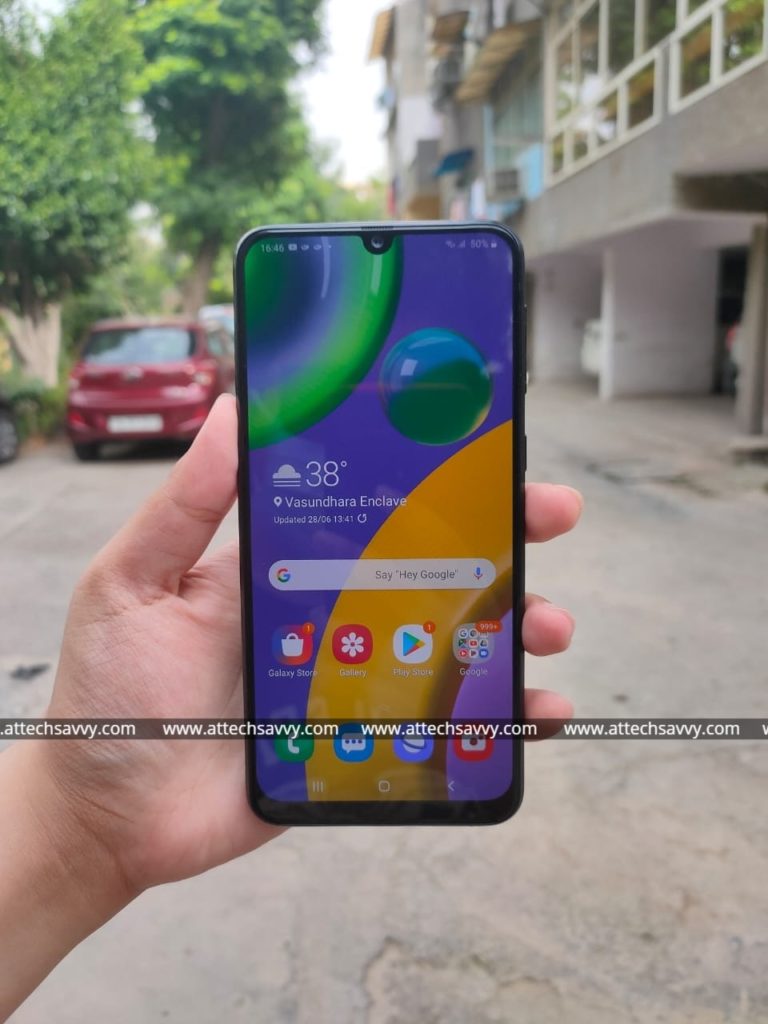 Samsung Galaxy M21 is powered by an octa-core processor Exynos 9611 with 2.3GHz clock speed along with Mali-G72. We get the same processor in the higher-priced Samsung Galaxy M30s, Galaxy A51 and Galaxy M31 also. The smartphone is available in 2 different configurations i.e. 4GB RAM + 64GB storage and 6GB RAM + 128GB storage.

However, we are reviewing the 4GB+64GB variant. The company has offered UFS 2.1 type storage which delivers read and write speed of 360 MB/s and 203 MB/s respectively. Besides, it runs on Android 10 based OneUI 2.0 that offers a clean and optimised experience with very fewer bloatware (like Helo, Netflix, Amazon Prime Video which can be un-installed) and the applications are launched very quickly. Thanks to OneUI, the spam notification scope is less, but My Galaxy App keeps pushing notification all day. Fortunately, the game booster feature available in the Galaxy M21 can block that.

The day-to-day performance is good and RAM management is adequate. There is not even slight delay when switching between applications or even while using an application as of now. However, if you play PUBG on it you will find frequent frame drops and that may give you average gaming experience. We get fingerprint scanner and face unlock for biometric authentication and both of them works pretty fast.

The audio via speaker is loud and there is Dolby-Atmos support for earphones/headphones. Moreover, while calling also we got clear and loud enough audio.

Here are some camera samples:

The camera performance is very good in daylight condition. The images clicked by the rear camera are very vivid and sharp. When adding a human element, the saturation is well maintained and we can say that the AI-powered camera can deliver much more than we expect. However, the outcome of the wide-angle image is not so good. The image loses its sharpness and details are merely visible. Besides, for macro shots, the camera works very well as it manages all the details and colours are accurate enough. We get a beauty mode-enabled selfie can that works good, there are details in the image with very less distortion. Moreover, the images are vivid and natural colours are seen. That’s impressive! 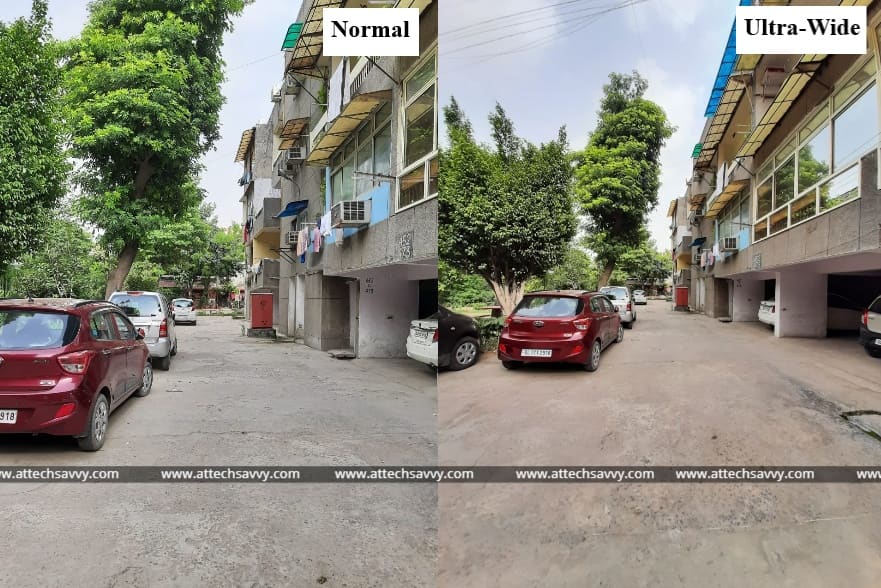 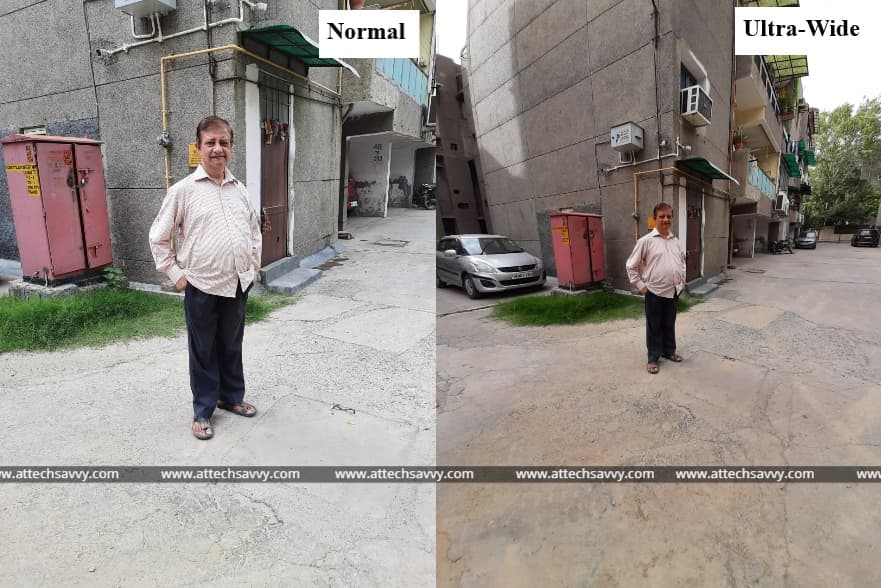 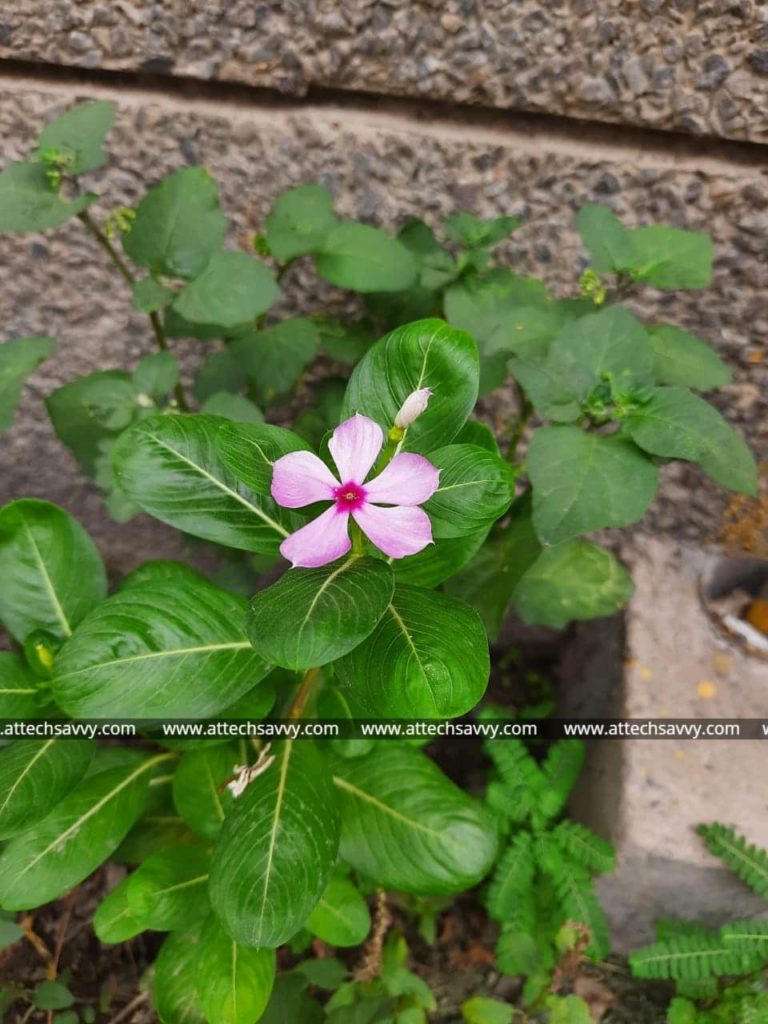 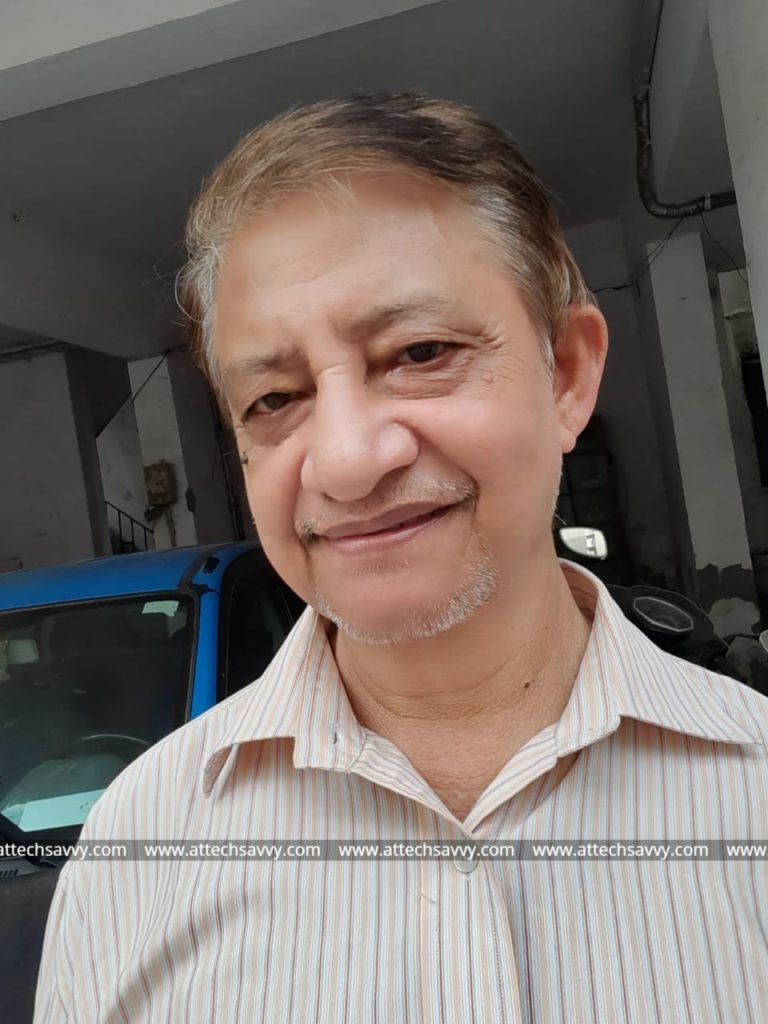 Note: If you shoot portrait image using this camera then you can also adjust the blur effect according to your preference even after clicking the image. Also while clicking, you can adjust blur level through the live focus mode.

The images clicked at night using Galaxy M21 seems to be good. The images are bit sharp but noise can be seen. And we also used the wide-angle lens to click images, however, the images were too dark and not satisfactory.

The rear camera performance under this condition is average as the images look dull but the details are somewhat evident. However, the selfie camera is below average, the image loses sharpness and noise can be seen if you zoom in. There are other smartphones in this price range that offer better image quality. 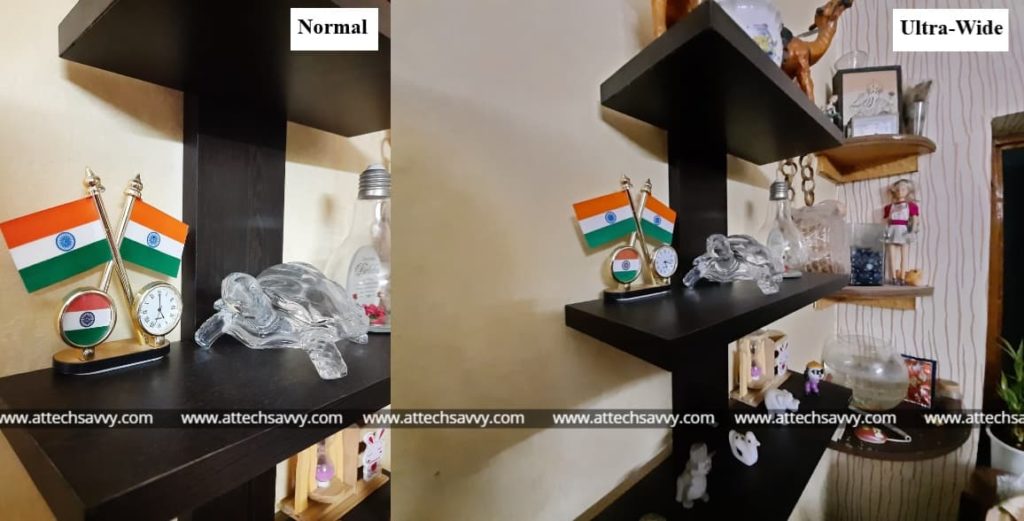 While testing the camera, we shot a short video and we found that it performed really well in 4K but there is no stabilization. However, the video shot was in 1080p and was stabilised (thanks to ultra-stable mode), colours were natural and captured audio very well. Though there’s a limit of 10 minutes while shooting 4K video, it may concern you. And for the selfie camera, the maximum video quality we get is 1080p.

Samsung Galaxy M21 is one of the few smartphones to come with 6000mAh battery. We played a 30 minutes video at the highest resolution on YouTube and the battery got down just by 3%. In normal usage, the battery delivers almost 2 days of battery life on a single charge. To charge the phone via USB-C port, Samsung offers a 15W Adaptive Fast Charger in the box.  While testing, the phone was charged up by 15% in 20 minutes and that is comparatively slower than other smartphones under the same price.

There are a lot of similarities between Samsung Galaxy M21 and M30s, but the Galaxy M21 is cheaper (about Rs. 3,000) than the Galaxy M30s. This device handles regular day-to-day tasks perfectly but in terms of gaming or photography, it may not fulfil your need. Nonetheless, if you want to buy a smartphone for regular use and great battery life or want to gift someone elderly, this smartphone is ideally suited. You’ll get a clean and smooth user interface (without any ads) but often you’ll be spammed with notifications that could annoy you.

In this price, the Galaxy M21 is decent in terms of overall performance and camera efficiency. We know that other companies including Xiaomi and Realme are offering better smartphones with outstanding performance. But if you strictly want to buy a Samsung smartphone under Rs. 15,000 then you have to compromise with the performance and specifications. 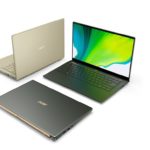 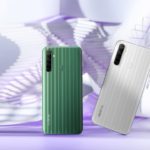