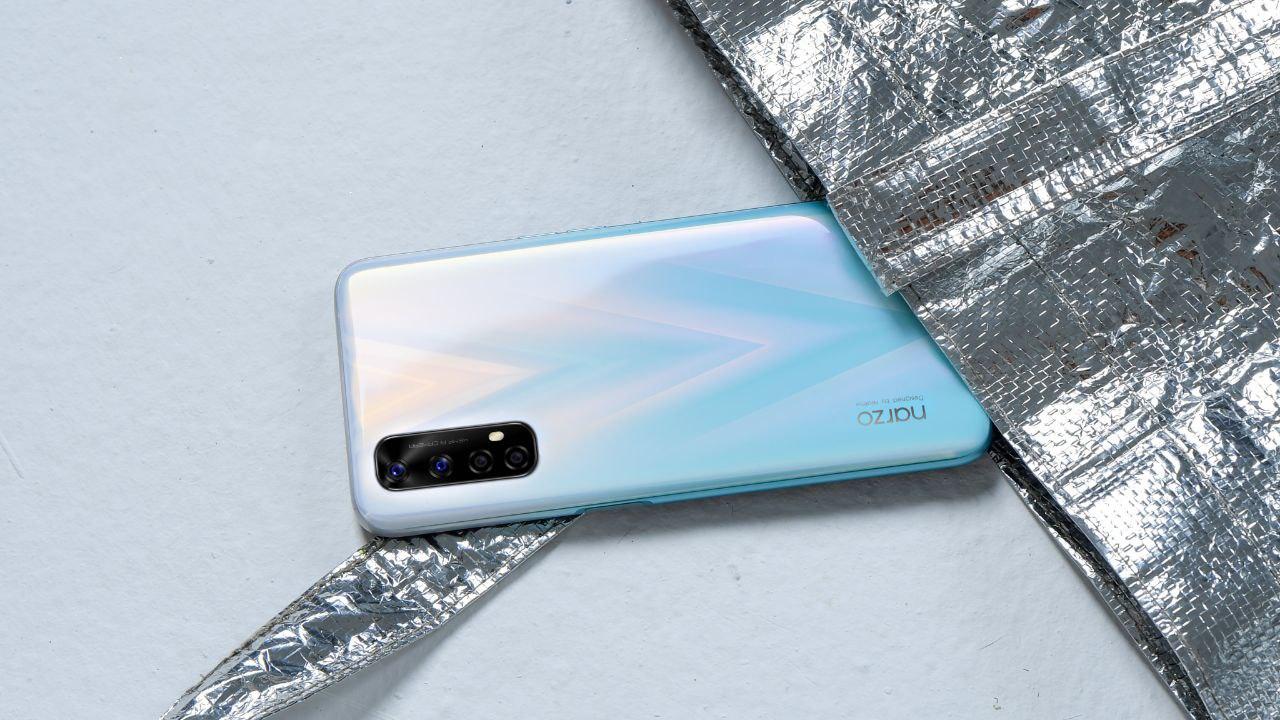 Within 5 months of Realme’s Narzo series debut in India, the company has launched its 2nd Gen and successor of the original Narzo smartphones. The original Narzo 10 series included just two smartphones – Narzo 10 and Narzo 10A, however, this time the Narzo 20 series includes Narzo 20A, Narzo 20 and Narzo 20 Pro. Apart from the Narzo 20A and Narzo 20 which are the successors to Narzo 10A and Narzo 10, the Chinese tech giant has launched a new addition to the series called Narzo 20 Pro. To remind you, the Narzo series of smartphones by Realme targets the Gen-Z youth as well as young gamers.

Starting with the most expensive one among the three phones, Narzo 20 Pro seems to be the same as Realme 7 that was launched a few weeks ago. One thing which will surprise you that Realme Narzo 20 Pro supports 65W charging and is the first phone under Rs. 15,000 to have so.

Now describing the design, the smartphone comes with a fresh gradient ‘V’ design and a quad-rear camera housed in the rectangular camera module. Besides, the fingerprint scanner is doubled on the power button for biometric authentication. The Narzo 20 Pro comes with a 6.5-inch FHD+ LCD display with 2400 x 1080 pixels resolution, 90Hz refresh rate, Corning Gorilla Glass 3 and a punch-hole cutout for the 16MP Sony IMX 471 selfie camera. The Dual-SIM phone is powered by MediaTek Helio G95 SoC along with up to 8GB LPDDR4 RAM and 128GB UFS 2.1 internal storage. The triple slot allows you to expand the storage up to 256GB via a MicroSD card. Moreover, the device runs on Android 10 with Realme UI layer and will receive Realme UI 2.0 soon. 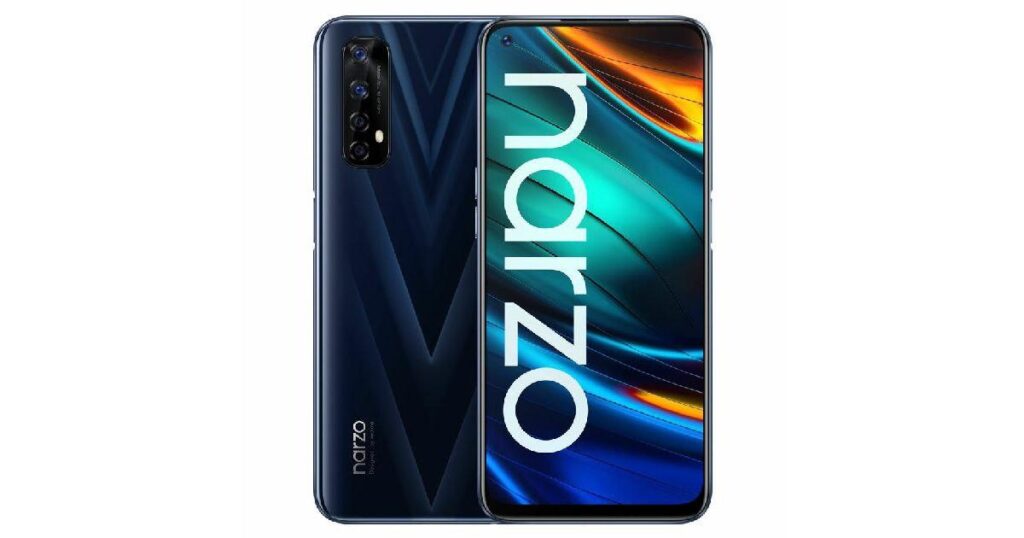 There is a quad-rear camera includes a 48MP primary sensor, 8MP 119-degree ultra-wide camera, 2MP monochrome lens and another 2MP macro lens. Narzo 20 Pro is bundled with a 4500mAh battery that supports 65W charging which can fully charge the phone from 0-100% within 38 minutes.

Now talking about the Narzo 20, the handset features a 6.5-inch HD+ LCD display with 1600 x 720 pixels resolution and a notch on the top accommodating an 8MP selfie camera. However, the rival Redmi Note 9 comes with a Full HD+ display at the similar price bracket. The Narzo 20 is powered by MediaTek’s Helio G85 chipset along with 4GB RAM and up to 128GB internal storage which can be further expanded up to 256GB. For biometric authentication, we get a fingerprint scanner placed on the rear panel. There is a 6000mAh battery packed in the phone that supports 18W fast charging solution. Besides, we get a triple rear camera setup housed in the square module that includes a 48MP primary sensor + 8MP 119-degree ultra-wide camera + 2MP macro camera. 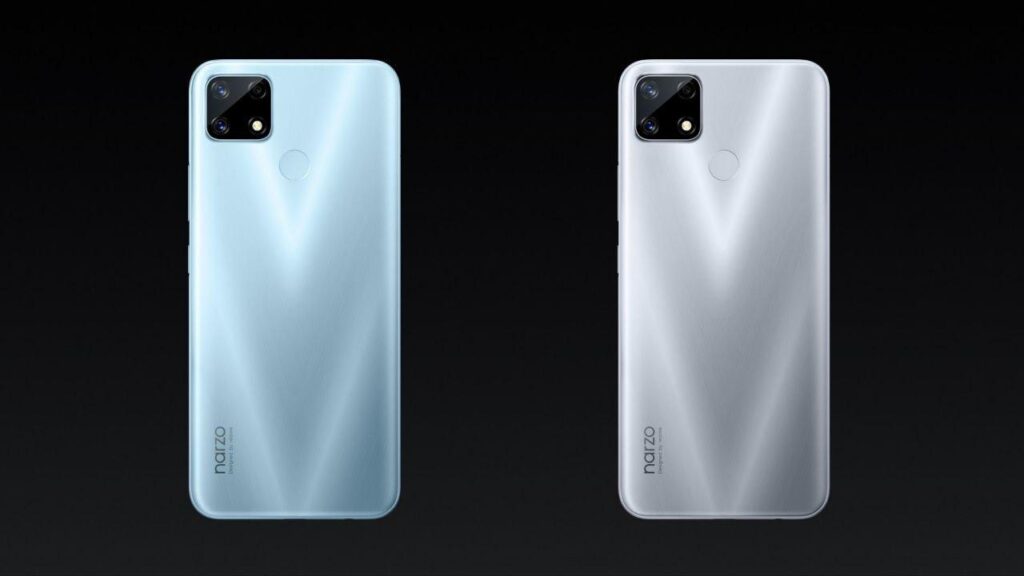 Realme Narzo 20A: Specifications and Features

The cheapest in the Narzo 20 series, the Narzo 20A features a 6.5-inch HD+ LCD display with 1600 x 720 pixels resolution, Corning Gorilla Glass 3 protection and a notch on the top to house 8MP selfie camera. The Dual-SIM smartphone is powered by Snapdragon 665 SoC along with up to 4GB RAM and 64GB internal storage which can be further expanded up to 256GB via a MicroSD card. Also, the phone features a triple rear camera setup including a 12MP primary camera, 2MP monochrome lens and 2MP macro lens. Ther smartphone is equipped with a 5000mAh battery that supports 10W charging technology. 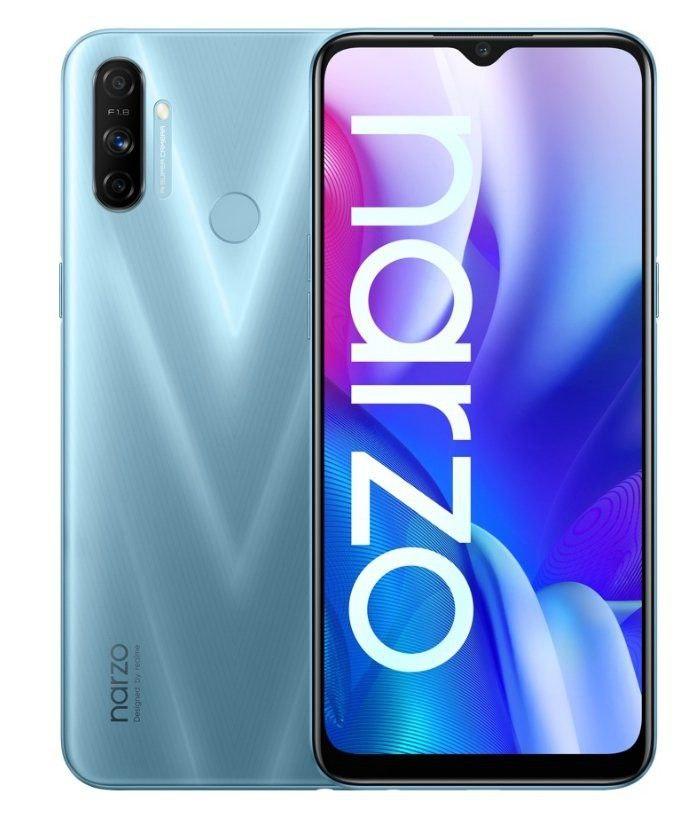 Narzo 20 Pro has been launched in the country at Rs. 14,999 for the 6GB+64GB variant and Rs. 16,999 for the 8GB+128GB variant. It is available in two colour options – Black Ninja and White Knight. If you are interested to buy then it will be sold from September 25 on Flipkart and Realme.com

The Narzo 20 is priced at Rs. 10,499 for the 4GB+64GB variant while the 4GB+128GB variant is sold at Rs. 11,499. The smartphone is available in two colourways i.e. Glory Silver and Victory Blue and will be available on sale from September 28 at noon exclusively on Flipkart and Realme’s website.

Moreover, the Realme Narzo 20A available in Glory Silver and Victory Blue comes with a price tag of Rs. 8,499 for the base 3GB+32GB variant. The higher 4GB+64GB variant is priced at Rs. 9,499. It will be sold starting from September 30 at 12 noon on Realme’s website and Flipkart. 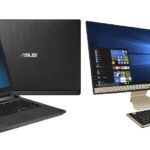